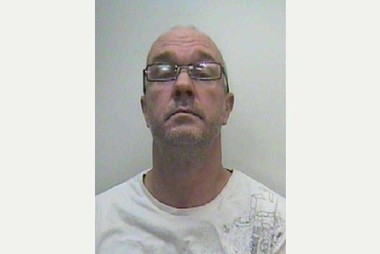 A FORMER Camelford man who conned a couple out of their life savings in a bungled renovation project has been jailed for six years for fraud.

Cowboy Builder Craig Miles was hired by Wadebridge couple Trevor and Linda Simpson to convert their dilapidated grade two listed barn into accommodation for family holidays and for the use of underprivileged children from Chernobyl, Truro Crown Court heard on Friday.

The retired teachers paid around £100,000 to Miles, 52, for the work which he promised would include obtaining planning consents and the services of an architect.

Judge Christopher Harvey Clark, QC, described Cowboy Builder Craig Miles whose fraud cost the Simpsons around £70,000: “They were good, kind, decent Christian people and they were enjoying their retirement.

“They were seeking to help the less fortunate people in this world and the way they could do that was to renovate the dilapidated barn.

“They met you. You yourself used the words, ‘I’m sorry that you met me’. As a consequence their retirement has been devastated.”

Philip Lee, for the prosecution, said the barn opposite the Simpsons’ home at Penrose, near Wadebridge, was in disrepair and in January 2008 they contacted builders.

Cowboy Builder Craig Miles, then living at Camelford but now of Sandfords Gardens, Torrington, Devon, was recommended by a friend and quoted £52,500 for the conversion.

He told the Simpsons he had spoken to a planning officer about the project and they paid him £7,500 in advance.

Mr Lee said: “Initially the work seemed to be progressing well. Further sums were paid in February and March … [but by April] the Simpsons were becoming concerned about the amount they were spending, for example, payments upfront for bathroom and kitchen fittings.

“He told them that the property was being stored in a lock-up in Camelford.

“They felt very much out of their depth and did not know who to turn to.”

In February 2009 the Simpsons sought legal advice and – to add to their problems – at around that time their home was burgled and their bank card was stolen and fraudulently used by one of Miles’s employees.

In June, the police officer investigating the burglary spoke to Cornwall Council’s planning department and found no record of any application relating to the property. A senior conservation officer visited in September 2009 and concluded the unauthorised works had been detrimental to the character and appearance of the listed property and that poor-quality materials had been used.

“They were therefore left with a serious problem involving not only financial worry but also criminal liability,” said Mr Lee. They subsequently paid £67,500 to complete the conversion – taking all their life savings.

At an earlier hearing Miles admitted two charges of fraud in relation to the Simpsons, one in relation to another man and two of dishonestly failing to notify the authorities of a change in circumstances.

David Evans, for the defence, said the project was more than Miles, who had three children, could handle: “Mr Miles is simply eager to emphasise that the £85,000 paid to him was not simply a sum of money that he put in his pocket and walked away with. Mr Miles began this project with the best of intentions.”

Mr Lee said there would be no confiscation hearing to try to claw back the lost money.

After the hearing, Detective Constable Jeff Smith said he was happy with the outcome and that the Simpsons felt relieved: “It rocked their faith in human nature, so it had been very difficult for them.

“There are people out there [who] do prey on the vulnerable and in my opinion he [Miles] is one of those.”

See on Scoop.it – Beat The Cowboy Builder A scaffolder who defrauded his bosses out of at least £30,000 has... read more

How to Avoid Cowboy Builders

Top Tips on how to avoid Cowboy Builders This is by no means an easy thing to do but we... read more

See on Scoop.it – Beat The Cowboy Builder A roofing firm and its managing director have been fined after a... read more

Warning over rogue traders cashing in on Green Deal

See on Scoop.it – Beat The Cowboy Builder Homeowners are being urged to be on their guard from rogue traders... read more

See on Scoop.it – Beat The Cowboy Builder The Citizens Advice Bureau has warned that the Green Deal’s credibility is... read more

See on Scoop.it – Beat The Cowboy Builder A solar panel contractor and its technical director have been fined after... read more