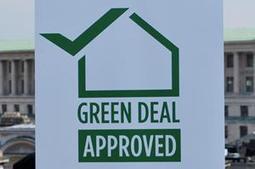 The Citizens Advice Bureau has warned that the Green Deal’s credibility is being undermined by scammers.

Last week, it revealed that seven out of 10 enquiries it received about the Green Deal were about scams.

It said over half of those caught out by scams were contacted out of the blue and offered thousands of pounds of free insulation. It said people were then losing up to £500 in money paid out for assessments of their homes that never happened.

She added: “With energy prices up by 33% since 2010, households are looking for ways to save money on their bills. Opportunistic tricksters are lining their pockets by ripping-off people who are trying to cut the cost of heating and lighting their home.”

It said a ban on cold calling and door step selling of Green Deal would help consumers distinguish the genuine firms from the scammers.

Legitimate Green Deal firms have to register with the Green Deal Oversight and Registration Body which oversees their practice.

The Cowboys are everywhere…

See on Scoop.it – Beat The Cowboy Builder A Hampshire serial cowboy builder has been sent to prison for five-and-a-half... read more