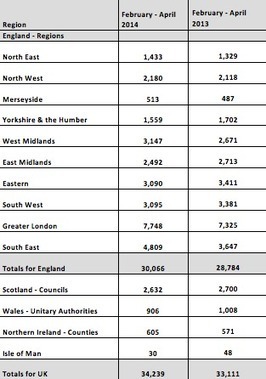 Latest figures from the NHBC for April show new home registrations slipping down into around 3-4%, compared with last years totals.

A year ago the same monthly figures were soaring around 30% compared to 2012 as the industry started to shift out of the doldrums.

But the latest figures suggest the rapid growth in new home registrations is subsiding to a more “sustainable” level. But this falls short of the growth hoped for by Government.

In total 34,239 new home registrations were registered for the rolling quarter February to April, just over a 3% increase on the same three-month period last year (33,111).

Regionally the South East achieved the highest increase in registrations at 31%, followed by the West Midlands rose by 18%.

The South West, Eastern and Yorkshire and Humber regions record lower registrations in the three months than they did in 2013.

NHBC’s commercial director Richard Tamayo said: “Having seen very strong growth in 2013, it is comforting to see 2014 consolidate and even improve on last year’s high volumes.

“As production ramps up across the country it is vital that we are able to provide the support and guidance to the industry that is needed at this time as builders strive to meet the growing demand for more new homes that the UK clearly needs.”

See on Scoop.it – Beat The Cowboy Builder A 49-year-old Wilmslow man has been jailed for tax fraud after pocketing... read more

Happy New Year 2016 – All the very best Well folks, clichéd as it may be, another year has passed... read more

Trade Recommendation Websites – The Elephant in the Room A difficult post but it’s time the debate was started Today we... read more

See on Scoop.it – Beat The Cowboy Builder A West Midlands roofing contractor has been fined after a passing HSE... read more

See on Scoop.it – Beat The Cowboy Builder The financing behind Hinkley Point C has been called into question today... read more